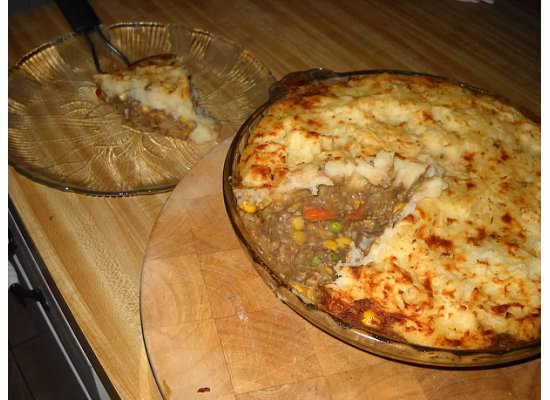 When I think of lentils I can’t help but imagine the Biblical scene where Isaac’s laying on his death bed and Jacob’s about to supplant his brother Esau by fooling Isaac with a bowl of lentils and a sheep’s skin wrapped around his arm to imitate his wild and  hairy brother.

“Oh, man!” Isaac exclaims, “This is the blandest set a beans I ever did eat! Y’all gotta’ be Esau ’cause Jacob’s a fine bred man and no fine bred man would waste his time on these here mushy undersized beans!” Turning to his wife who’s in cahoots with Jacob to steal Esau’s blessing, he ask her, “Is this here boy intent on killin’ me? ‘Cause if he is, he’s doing a quick job of it!… “Oh, I’m a dead man fer sure now!”

OK, I know Isaac didn’t have a Texas cowboy accent but I think they call what I just wrote literary license or something like that… it’s allowable under the right circumstances. Besides, I know Isaac would have fallen in love with Texas.

So you ask,  what has lentils got to do with Shepard’s pie? Plenty if you want a meatless dinner for a change. I’m not going to haggle about the good or bad of beef here, that’s for you to decide upon. I will say that if you ain’t eating real Range of Grass fed beef then all them cancers and other such medical maladies might just be your own fault. ‘Nuff said about that!

Back to the Pie. You can easily replace the lentils here with 1 lb of grass fed chipped or ground beef but for the sake of my daughter in law who fed me this surprisingly good dish, I’ll keep it to her original recipe.

Now, a bit of history (you know I’m a big history buff so bare with me) “Shepard’s pie” began as “Cottage pie” somewhere around 1791 or about the time poor folks here started eating potatoes. The word cottage did not mean a small vacation home along the banks of an upstate New York lake, instead a cottage was a small dwelling, sometimes made of sod, logs or if available, cut lumber. It was a humble abode built mostly by poor folk. Shepard’s Pie was the American version of the French Ratatouille (made famous in the  Disney film of the same name). Most every culture’s favorite recipe comes from poor folks kitchen for survival and not created to impress folks. Basically it was a mish mash of veggies that were available to the poor from their own gardens. Potato’s had been thought to be poisonous a bit before that so they weren’t real common. Maybe the early settlers saw the Irish eating them without dying and that convinced the poor folks in this country that eating a potato may not be so bad after all. I mean the Irish were alive even after getting pie faced on there homemade whiskey so maybe they were onto something. Today we call that moonshine and someday I’ll put my recipe for it on this site since it too is a Heritage Recipe… illegal but a Heritage recipe none the less.

The first time “Shepard’s” pie was found in writing is in 1877. Now folks bicker about the origins but I’m figuring most all cultures have their own version of Shepard’s pie, the same as the French with their Ratatouille. In rural Appalachia where potatoes don’t grow well, bread crumbs were used and Shepard’s Pie was called Cumberland Pie.  So now you know.

The recipe is simple.

Place potatoes in a large saucepan and cover with 2 inches of water. Bring to a simmer over medium-high heat. Reduce
heat to medium, partially cover and cook until tender, 10 to 15 minutes. Drain and return the potatoes to the pot. Add
buttermilk, butter and 1/4 teaspoon each salt and pepper. Mash with a potato masher until very smooth. Add enough water to get the potatoes similar to frosting, but not soggy. Dry potatoes don’t spread well.

While the potatoes are cooking, position rack in upper third of oven; preheat broiler. Coat four 10- to 12-ounce
broiler-safe ramekins (or an 8-inch-square broiler-safe baking dish or glass pie dish) with cooking spray. Place ramekins on a broiler-safe
baking sheet.

Divide the hot lentil mixture among the prepared ramekins (or spread in the baking dish). Top with the mashed potatoes. (Don’t get upset if they don’t spread easily, just do what you can).
Broil, rotating halfway through, until the potato is lightly browned in spots, 6 to 10 minutes. 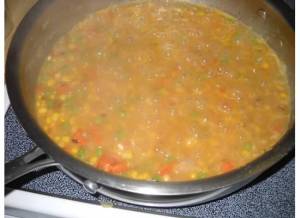 In a large frying pan I add the veggies and spices then simmer until soft. 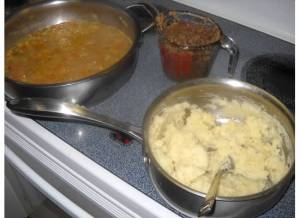 I have my mashed potatoes all done 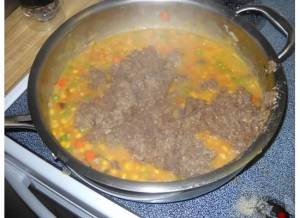 Here I add my cooked Lentil beans to the veggies 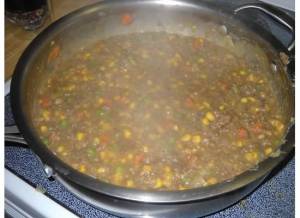 I simmer these until thickened with the flour 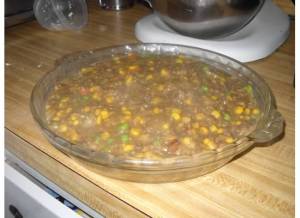 When ready, I pour the mixture into a pyrex pie bowl 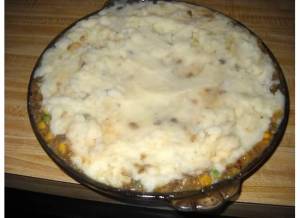 I carefully top the mixture with my very soft mashed potatoes 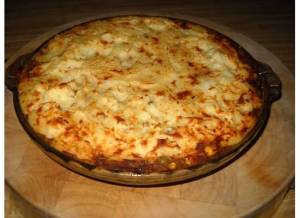 Earlier in this post I mentioned the Scott/Irish connection to their wonderful distilling of Moonshine. I was about to post my own recipe for “Moonshine” but then wondered if WordPress might delete it since the making of Moonshine is not actually legal. (Distilled spirits). So instead I did a slight alteration and in the end I think it’ll be a lot easier on you if you decide you want to wet your lips on the real McCoy of booze.  With this recipe, you’ll have no need to run out and buy a bunch of sheet copper, tubing and silver solder to make a still with. Today you can find real “Moonshine” in many State liquor stores. So here in this post I am using a store bought jar of Moonshine for the photo…note that I said “Jar” and not the spirits.

Anyway, to make one of the best flavored moonshines all you need is some fresh or frozen berries… plus a hunk of burnt oak wood.  Add a hand full of the berries into your “Jar” of moonshine. You may need to empty out some of the spirits in the jar so it don’t overflow before you add the berries. (That means drink some of it!) I use a mixture of Black, Blue and Raspberries in equal amounts. The burnt piece of wood is important in removing a lot of the bite in the original moonshine. It acts as a wooden cask does. It absorbs the bite and mellows the shine with the carbon from the burnt wood. It only take a hunk the size of a 9 Volt battery. Find a nice dried oak twig, cut it into a 2″ long piece and burn 1/2 half of it pretty well. DON’T put the hot ember in your shine, this may cause it to blow up! Instead, drown the hunk in tap water then when you’re sure it has no burning ember to it, place it in your jar of shine. 2-3 weeks later, Strain the shine through a coffee filter and you will have the best berry flavored moonshine you ever tasted! And a lot of the bite will be gone too. Before replacing the cap, reinsert the burnt oak wood piece. This will continue the “aging” process of the shine. Real shine is drank straight from the still after adding a bit of water to it. This is a bit more refined than straight Moonshine and if you’re a woman (not being sexist here, just fact) you’ll appreciate the mellow berry taste. Men on the other hand won’t admit to that and decry the fouling of real undiluted shine. We all know men will pretend to enjoy anything that makes them look manlier than they really are so bare with them ladies. JW 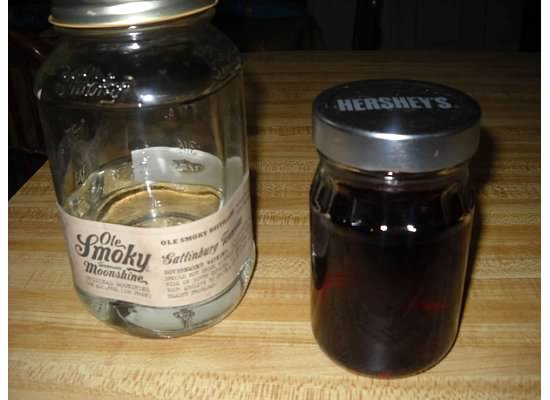 5 comments on “Who put the lentils in my Shepards Pie?”