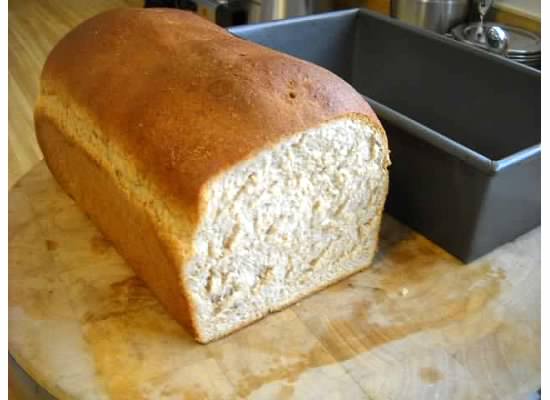 With it’s end slice removed, the texture of this homemade bread can easily be seen. It is absolutely delicious!

In an earlier post I had given the recipe for “The perfect loaf of homemade bread”.

In that recipe I used a combination of whole wheat and high gluten bread flour to imitate the rougher grainy flour of yesteryear.

My cousin in Idaho (after seeing my bread post ) wrote me to say that she had Grandma Edwards recipe and still often bakes it. She too had to adjust the flour mixture to imitate the rougher grainy flour that my Grandmother’s grain mill had produced. Sadly, she said the mills disc had worn out and would not grind any finer than a cracked wheat. By trial and error she finally accomplished what she had set out to do… reproduce as closely as possible the flour my Grandmother ground by a hand mill using wheat grain.

When I looked over the recipe, I realized how similar but how different t was from the one I had posted. I decided to bake up a couple of loaves to see what the difference really was. Was I surprised!

My cousin’s recipe was truly an exact reproduction of what old fashioned bread should be. Soft, yet with a true home ground whole wheat texture. It was so full of flavor I knew I had to post it. In the picture you will see the texture this recipe has produced. It is not flaky or crumbly. While soft, it still retains a firm body found in artisan breads. I know I will continue to be making many loaves from this recipe. Here is the recipe my cousin sent me.

3 Tablespoons of sugar. Divide by setting aside 1 tablespoon of sugar to rise yeast

In your electric mixer’s bowl with dough hook, combine and mix together on low, both flours, salt, 2 Tablespoons of sugar  and (powdered milk if using it).

In a smaller bowl combine 8 oz of very warm milk, Karo syrup, melted butter, egg yolk, 1 Tablespoon of sugar and 2 teaspoons of yeast. Mix well with a fork and let stand until bubbles begin to form showing that the yeast is activated.

In your dry ingredient mixing bowl, create a low spot in the center and begin to add the wet ingredients while the mixer is on low speed. Continue adding wet mixture until dough begins to form into a soft spongy ball. After mixing for a few minutes, dough should not stick to your fingers when touched but should feel damp. Knead dough for 10 minutes using the electric mixer. After well kneaded, the ball of dough should feel very spongy. Remove dough and place on a lightly floured surface and knead by hand 10 to 15 times forming it into a ball. Place dough ball into a large greased bowl to rise. When dough is doubled in size, remove and press down lightly to deflate the dough ball. Shape into a loaf and place it into a greased bread pan, let rise until ½ inch higher than lip of pan.

When dough is risen to the desired height, poke holes along the top of the center at 2” intervals no deeper than 1/4″ with a tooth pick to let gas build up escape while rising in the oven. Brush the top of the loaf of bread with milk and place onto middle oven rack in the center. Set a timer for 35 minutes.

Remove when done ( it should sound hollow when thumped) and brush the top with a coat of water this time. Let cool under a kitchen towel. 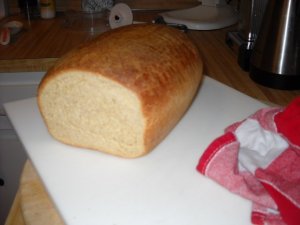 The perfect loaf of bread

Did you ever attempt to reproduce the loaf of bread your mother or grandmother used to bake? How many loafs turned out just like hers?

After my Mom passed away, I came across her lifelong collection of recipes. Many I already knew because of my interest in cooking. My own recipe collections had helped propel me into the restaurant business. But there was one recipe that eluded me no matter how many books I bought or magazines I read , that of a the loaf of homemade bread I had eaten as a child growing up in Idaho. It was the one recipe my Mom had not written down in her collection, she didn’t need to, she knew it by heart. To her it was like breathing. There is no need for an instruction manual in breathing, is there?

It wasn’t until I was in the process of doing research for my coffee table cookbook ( Maw Maws recollections, observations and recipes) that I realized in fact I did have my mother’s recipe. In my younger days when my Mom was still present on this celestial ball, I once took a job as the foreman on a cattle ranch. There, I befriended Jeff, a fellow ranch hand. Now Jeff lived in the small town just outside the ranch along with his 90 plus year old but very spry grandmother. On a cold rainy day, I gladly offered to drive him back home when his pickup truck refused to start. As I entered his home behind him, I smelled the delicious aroma of his grandmother’s freshly baked bread. Being from a generation that believed you should never let company part your home hungry, she sliced up the warm loaf and spread a goodly amount of butter on it. I remarked on its familiar taste and color telling her I believe my Mom made her bread from the same recipe. Jeff and I talked of weather concerns and other ranch related subject until I had to get going. As I was leaving Jeff’s grandmother handed me a hand written copy of her bread recipe. Thanking her profoundly, I returned to the ranch. Since my own mother was still years away from leaving us, I put the recipe along with other mementos of the ranch in a box for safe keeping.

There it lay packed away for over thirty five years. Jeff is a grown man now with young grandkids. Sadly, as is the nature of things, his grandma passed on some years ago. It was on a day when one begins to reminisce about his childhood that I came across her bread recipe in that box. How ironic it seemed that the one thing I really wished I had, I had in fact been safely harboring for years! Since that time, I have rarely purchased bread at the grocery, and when I do, it taste bland and mushy!

I hope you find some similar memories as I did when you smell the familiar scent of this real homemade bread baking.

2 1/2 teaspoons of yeast (Instant or active, it makes little difference)

2 Tablespoons of milk for brushing the loaf before and after baking. This gives the loaf a wonderfully soft crust.

1) Using a mixer with a dough hook, add the dry ingredients and mix together well. Then add the wet.

There is no need to pre mix water, sugar and your yeast. Most common yeast today will activate without a ‘wet’ pre activation step

3) Knead the dough ball on low for 5 minutes, then remove it, fold it over on itself a few times and replace the dough into the mixer on low for 3-4 more minutes.

4) Place kneaded dough in a greased bowl and cover the bowl with a damp kitchen towel. Let it rise until double in size. Approximately 1 hour. Since high gluten flour can rise faster than regular flour keep an eye on it. Do not let it rise past double its size.

5) Once risen to its proper size, remove and gently punch down the dough. Fold and shape it into a nice smooth loaf and place it into a greased bread pan with the seam on the bottom.

7) When the dough has again risen with its top peaking 1/2 inch above the bread pan and it fills the pan, brush the top of the loaf with milk. Using a toothpick, poke a few holes in the length of the top. This will prevent the loaf from bursting out its side from the rapid oven rise. The holes act as gas escape vents.

8) Place in the pre heated oven for 35  minutes or until nicely browned and hollow sounding when you ‘thunk it’ with your fingers.

Each oven bakes differently so keep an eye on it. This bread will look darker than regular bread due to the molasses in it!

9) When done, brush once again with milk and cool for 10 minutes then remove from the bread pan and cover with a dry towel until completely cool. Place in a plastic shopping bag and refrigerate to extend its freshness. There is no preservatives in this bread so it should be consumed within a few days.